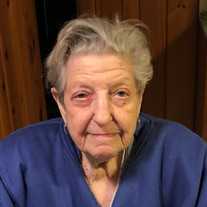 Camille R. Mattarelli, 100, of Stafford Springs, CT, wife of the late Mario “Muzzy” Mattarelli, passed away on April 3, 2021 at Evergreen Health Care Center. She was born in Hartford, CT, daughter of the late Bernardino and Rose (Cartelli) Rosati. Camille had worked as a meat wrapper at the former Co-op Food Store, and was a member of the Stafford Senior Center. She regularly attended Friday night Bingo at the Legion for over 40 years. Camille is survived by her daughter, Deborah Parker-Williams and her husband Patrick; sister-in-law, Ann Rosi; and several nieces and nephews. She was predeceased by her brother, Paul Rosati. Camille was born Carmela Rosati at home on Village St. in Hartford. In 1925, her family moved to Avon Road in Unionville, where she enjoyed country life, often in the company of her maternal grandmother, gathering wood for the stove, harvesting berries & wild greens. Her father worked at Miss Porters School in Farmington. They moved to Pleasant Street in Hartford in 1928, later to Goodman Road, Chapel Street, Walnut and finally Albany Ave. Camille went to Barnard School, then Hartford High School, where she showed great talent in watercolor, oil painting & ceramics, graduating in 1940. She was awarded a full scholarship to Pratt Institute in NYC, but her mother would not let her leave home. In 1945, she married her first husband, Kenneth H. Parker, father of her only child, and officially changed her name to Camille. During WW2, Kenny was drafted; during basic training, she followed him to Oklahoma, then Paris, Texas. When he was deployed to Europe, she lived with his parents, Harold & Betty, at their home on Lawrence Street in East Hartford, where she joined the war effort, working at Pratt & Whitney Aircraft. After the war, Camille & Kenny bought their first home, a Cape on West Middle Turnpike in Manchester. Both worked at Sage Allen in Hartford until 1952, when Camille left at 33 to give birth to their daughter. With her friend Dottie, she opened Camdot Ceramics Studio, near the original Shady Glen in Manchester, where they gave lessons. Around 1956 or ‘57, Ken & Camille moved to Vernon, where she continued with Camdot Studio in the large basement. and with his parents bought a summer cottage on Lakeshore Blvd. on Staffordville Lake, where the family enjoyed swimming, boating, cookouts. Ken was an avid waterskier, while Cam enthusiastically fished the entire lake, taking her dingy up the cove, drifting back down. Many bass, trout & pickerel were caught & cooked! They made many good friends there, enjoyed many card parties, and excursions to Holland Lake for Friday night dancing. Sometime after her divorce from Ken became final in July 1962, Camille & “Muzzy” started dating. They married December 7, 1962 and lived first with his mother, then in an apartment overlooking the Mill Pond, finally in the home they had built on Monson Road in 1964. They were active with The Italian Club and had regular card nights with friends. Muzzy liked to stay near home, so Camille enjoyed bus trips with friends, visiting many interesting places. They both continued fishing together & hunting for mushrooms. In 1978, she traveled to Italy with her daughter & son-in-law, visiting her father’s home town, Lenola, meeting her uncles, aunts & cousins. About 2011, when Muzzy could no longer live at home, she would visit her daughter for a few months every winter; Debbie began to stay with her during the warmer months when she was not doing well alone. In 2017, Debbie & Patrick bought the home on Stafford Street and Camille moved in with them; she celebrated her 100th birthday there in June. She continued to paint several watercolors every day, enjoyed walking in the yard and finding flowers to bring inside, was thrilled to see the deer that occasionally came by. During her last few weeks at Evergreen she was still telling the nurses about her grandmother and drawing pictures for them. We are very grateful for their kindness. A calling hour will be held on Thursday, April 8, 2021, from 1-2 P.M., with a funeral service to take place at 2 P.M., at Introvigne Funeral Home, Inc., 51 East Main St., Stafford Springs, CT. Burial will be held privately in Cedar Hill Cemetery, Hartford, CT. Memorial donations may be made to the Stafford Senior Association, 3 Buckley Highway, Stafford Springs, CT 06076. To leave a condolence online for the family, or for directions, please visit: www.introvignefuneralhome.com Zoom link: https://us05web.zoom.us/j/5369119362?pwd=TmNJeTRJZUptSk1FTG92djFQVk10UT09 Meeting ID: 536 911 9362 Passcode: IFH

Camille R. Mattarelli, 100, of Stafford Springs, CT, wife of the late Mario &#8220;Muzzy&#8221; Mattarelli, passed away on April 3, 2021 at Evergreen Health Care Center. She was born in Hartford, CT, daughter of the late Bernardino and Rose... View Obituary & Service Information

The family of Camille R. Mattarelli created this Life Tributes page to make it easy to share your memories.

Send flowers to the Mattarelli family.