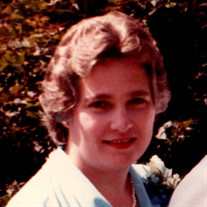 Caroline (Kotrba) Hipsky passed away at home on August 22, 2020 following a courageous battle with cancer. Born on February 20, 1943 in New York City to the late William and Caroline (Vesely) Kotrba, she moved to Willington in 1956 and attended Windham High School. During her senior year, she met the love of her life, Robert, on the school bus. They were married two years later on June 16, 1962 and remained in Willington where they raised their three children. Caroline possessed a great love of animals and after purchasing two goats for her daughters in 1972, she establishedthe De-La-RoGoat Dairy, one of only a few dairies in Connecticut licensed to sell goats’ milk at the time. During Caroline’s 41 year career as a purebred Toggenburg and Nubian breeder, she raised many champions, showing them all over New England. She was a 4-H leader and mentor to many, was the founding president of the Eastern Connecticut Dairy Goat Association and a member of the American Dairy Goat Association. Caroline was also an avid gardener and lover of nature. In retirement, she enjoyed playing word games and puzzles “on the computer”. Caroline is survived by her beloved husband of 58 years, Robert Hipsky, Sr., daughter, Denise Gugliotti and her husband Daniel of Woodstock, daughter, Laurie Hipsky and her husband Jan Dybdahl of Ashford, her son, Robert Hipsky, Jr. and his wife Ashley of Willington, her brother, William Kotrba and his wife Sandra of Windham, 9 grandchildren and 7 great grandchildren. Burial will be private. Arrangements are being handled by Introvigne Funeral Home, Stafford Springs. In lieu of flowers, memorial donations may be made to the Willington Fire Department, P.O. Box 161, Willington, CT 06279. To leave a condolence online for the family, please visit: www.introvignefuneralhome.com

Caroline (Kotrba) Hipsky passed away at home on August 22, 2020 following a courageous battle with cancer. Born on February 20, 1943 in New York City to the late William and Caroline (Vesely) Kotrba, she moved to Willington in 1956 and attended... View Obituary & Service Information

The family of Caroline Hipsky created this Life Tributes page to make it easy to share your memories.

Send flowers to the Hipsky family.