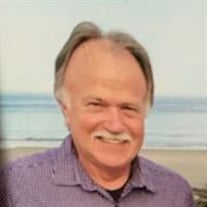 Daniel E. Leach, 69, of Ellington, CT, passed away on Tuesday, January 25, 2022 at Mercy Medical Center. He was born in Stafford Springs, CT, son of the late Robert Leslie and Edna (Sylvester) Leach. Dan owned and operated Carrol Bullets along with his business partner, the late David Carrol, and his late sister-in-law “Tizzy”. He also worked as engineer for Fluoropolymer Resources, for Knight Construction and part time as a police officer in Stafford. Dan was currently the President of the Eastern Connecticut Sportsman Club in Ashford and reigned for 13 years. He had a great sense of humor, and was an avid sportsman who also had a great love of motorcycles, traveling and skiing. He was a very kind and generous person who was larger than life and always willing to help others, especially with home projects. Dan is survived by his loving wife of 33 years, Tammy (Knight) Leach; his son, Kyle Leach and his companion Nicole Blackmer; four siblings, Carol Leach and her companion George Reynolds, Linda Pisciotta, Ronald Leach and his wife Patty, and Judy Brooks and her husband Paul; his brothers-in-law and sisters-in-law, Merritt Knight and his companion Rachel Linkkila, Robin Knight and his wife Wendy, Lynette Devlin and her husband Scott, and Kenneth Cunningham; and many nieces and nephews, who he loved with all his heart and known by all as Uncle Dan!!! He was predeceased by his brother, Robert Leslie Leach II; sister-in-law, Elizabeth Cunningham; and brother-in-law, John Pisciotta. His funeral service will be held on Friday, January 28, 2022 at 11 AM at Introvigne Funeral Home, Inc., 51 East Main St., Stafford Springs, CT. Burial will follow the service at Willington Hill Cemetery, Willington, CT. Calling hours will be held on Thursday, January 27, 2022 from 6 PM to 8 PM at the funeral home. Memorial donations may be made to the Eastern Connecticut Sportsman Club, P.O. Box 52, Ashford, CT 06278. For online condolences or directions, please visit: www.introvignefuneralhome.com

The family of Daniel E. Leach created this Life Tributes page to make it easy to share your memories.

Send flowers to the Leach family.