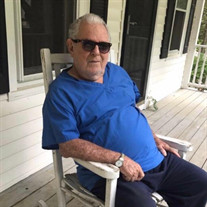 Donald “Bucky” Bellows, 84, of Woodstock, CT, passed peacefully Sunday, December 1, 2019 at UMASS Memorial Hospital surrounded by his loving family. He was born in Willimantic, CT to the late Raymond and Pearl (Baxter) Bellows on November 22, 1935. He proudly served his country in the United States Army from 1959-1963, serving primarily in Puerto Rico and Hawaii. After many years in Columbia and Willington, he moved to Woodstock where he resided for the past six years. After owning his construction company for many years, he was employed by the Town of Columbia, where he was beloved by many residents due to his quick wit and willingness to dedicate his time to many civic activities over the years. His proudest moments were enjoying his children, grandchildren, and great-grandchildren, and will be fondly remembered for always encouraging their behavior many times against the parent’s wishes. He was by far the best breakfast buddy anyone could ask for. He is survived by his loving wife of 47 years, Carolyne, and nine children, Nancy Hanks, Ronald Hanks, Stacy Hanks, Patricia (Bellows) Millix and her husband Tyler, Kristina (Bellows) Goulet, Eric Bellows, Jay Bellows and his wife Brooke, Ashley Bellows, and Chad Bellows. Additionally, he is survived by thirty-three grandchildren, five great grandchildren, and his sister, Gloria Melendy. He was predeceased by his brothers, Raymond, George, Douglas, and David. Bucky enjoyed constantly surveying the Woodstock farm in his golf cart in his later years, and always kept a keen eye on the wildlife, in which he found great solace. There will be no services. In lieu of flowers, the family requests memorial donations be made to either the American Cancer Society, P.O. Box 22478, Oklahoma City, OK 73123, or to the Bungay Fire Brigade, 1256 Route 171, South Woodstock, CT 06281. The family would like to express sincere gratitude to the members of the Bungay Fire Brigade and the nurses and staff at UMASS Heart and Vascular Center for their wonderful care. Introvigne Funeral Home, Inc., Stafford Springs, CT, has care of the arrangements. To leave a condolence online for the family, please visit: www.introvignefuneralhome.com

The family of Donald "Bucky" Bellows created this Life Tributes page to make it easy to share your memories.

Send flowers to the Bellows family.