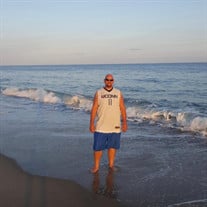 Edward Michael Teeter, 43, passed away unexpectedly at home with his four-legged side kick, Mere Bear, by his side. We are devastated by this loss as we didn’t get to say goodbye, but our hearts are full knowing he was loved by everyone he met along the way with his contagious smile, fun-loving personality and kind heart. Eddie was a graduate of Putnam High school class of 1996. He worked for over 20 years with Tyco/ADT, earning his electrical license in 2007 beginning work at the age of 19. He was a natural, so professional and hard working, very reliable and dependable, always scoring the high performance scores and customer reviews that he was so proud of. He took pride in everything he did. Eddie grew up playing little league, football, and basketball in Putnam, CT. They used to yell, “Hit it home, E.T.!” when he was up to bat. Sports were in his blood, and he loved to coach his children in all sports, was their biggest fan and took on the role of dedicated Coach Ed for basketball, baseball, and football throughout the years for all of the children in Stafford. He made many friends throughout the years coaching in the Stafford Little League and Stafford youth football and basketball. If he wasn’t coaching, he could be found on the sidelines cheering Olivia on during a softball game, Collin playing football at Cheney Tech, Ethan running across the lacrosse field, or pitching a bucket of softballs to the kids at the park after work as the sun was setting. He loved to be there for his nieces and nephews and they were always equally excited to see Uncle Eddie celebrating their wins over the years. Eddie loved to fish. One his favorite hobbies. Whether it was on the john boat he refinished, taking the kids out to catch their first big fish, from the side of the lake just casting lines, out on the ice on Lake Champlain in VT for the annual ice fishing tournament with the guys, pondside while camping or floating in the middle of Bigelow Hollow on his kayak, you would likely find him with a fishing rod in his hand during his free time. Eddie leaves behind a huge family. His children Collin, Olivia, and Ethan were his reason for living and he was an amazing Dad. He spent 23 years raising his family with their mother, Melissa Miclette of Pomfret, CT. He was also a loving brother, uncle and friend and this unbearable loss is incredibly difficult for us all. We want him to be remembered for the love, support, encouragement, laughter and friendship he selflessly gave to everyone over the years. Besides his children, he will be forever missed by his sister Brianne and her children Natalie, J-veion, Julianna, and Malachi of Westborough, MA, his father and mother in-law David and Elaine Miclette of Moultonborough, NH, his brother in-law Justin and sister in-law Dawn Niderno and their children Patrick, Dylan and Francesca of Willington, CT, his sister in-law Darcie Miclette and her children Maya and Caleb of Stafford, CT, his brother in-law Andrew and sister in-law Felicia Miclette and their children Avalynne, and Everett of Stafford, CT and his brother in-law Jeffrey Dugan and sister in-law Amanda Miclette and their children Matthew, Briana, and Jake, and his great-niece Sophia and great nephews Owen and Henry of Stafford, CT. He was predeceased by his mother, Jeanie Teeter. A memorial service is being planned by his children to celebrate the life of their father. We ask that you keep our family in your thoughts and prayers as we grieve this immeasurable loss. In his honor, we ask everyone to spread a little kindness, check in on each other, share a memory with others, laugh about the good times, and keep him alive in your hearts.

Edward Michael Teeter, 43, passed away unexpectedly at home with his four-legged side kick, Mere Bear, by his side. We are devastated by this loss as we didn&#8217;t get to say goodbye, but our hearts are full knowing he was loved by everyone... View Obituary & Service Information

The family of Edward M. Teeter created this Life Tributes page to make it easy to share your memories.

Edward Michael Teeter, 43, passed away unexpectedly at home with...

Send flowers to the Teeter family.