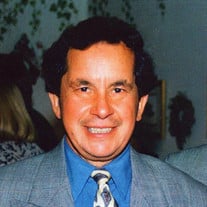 Gordon B. Tiziani, 86, of South Windsor, CT, passed away on Saturday, March 14, 2020. He was born in Stafford, CT, son of the late Louis and Laura (Satori) Tiziani. Gordon was a graduate of Monson Academy. During the summer in his high school years, his mother introduced him to Watch Hill, RI. All summer Gordon worked at the Olympia Tea Room in Watch Hill. When he was not working, he would always be at the beach. Gordon was employed as a cost analyst at United Technologies for over 30 years. In 1988, Gordon was told about a small seafood restaurant in Ellington, CT. He drove over to have a filet of sole lunch and happened to meet the owner, Christine. The rest was history. He married her at St. Luke’s Church in Ellington, CT in January of 1990, and took on a new role as a restaurateur. Gordon enjoyed golfing and was an avid sports fan. He was especially a fan of the New York Yankees and UConn basketball. Gordon was a true “people person”. He loved food and drink and to socialize and have a good time. He was also a role model to many of his nieces and nephews. He was known as the “patriarch uncle” of the family. Although he is now gone, his legacy will live on, and he will be deeply missed by many. Gordon is survived by his beloved wife of 30 years, Christine (Parker) Tiziani; step daughter, Lori (Deabill) Geilich; granddaughter, Allie Geilich; brothers-in-law and sisters-in-law, Gerald and Karen Parker, Mary Parker, Cheryl Parker, and Bruce Jacque; cousins, Janet Maciolek, Roseann and Anthony Scussel, and Jeremiah Quill; his best friend, Joseph Paradiso and his family; and many nieces, nephews, and cousins. He was predeceased by his father-in-law and mother-in-law, Earl and Eileen (Fitzgerald) Parker; sister-in-law, Eileen Jacque; brothers-in-law, Michael and David Parker; son-in-law, William Reid Geilich; and cousins, Andrew Maciolek and Marie Quill. A Mass of Christian Burial will be held at St. Edward Church, Stafford Springs, CT, at a later date. Burial will be private. Gordon loved his granddaughter very much, and was so proud of all of her accomplishments in school. Her continued education was paramount to him. In lieu of flowers, to honor Gordon’s memory, donations in his name may be made to the Allie Geilich Education Fund at Windsor Federal, 250 Broad St., Windsor, CT 06095, or to Journey Found, Inc. Endowment Fund, 60 Hilliard St., Manchester, CT 06042. Introvigne Funeral Home, Inc., Stafford Springs, CT, has care of the arrangements. To leave a condolence online for the family, please visit: www.introvignefuneralhome.com

Gordon B. Tiziani, 86, of South Windsor, CT, passed away on Saturday, March 14, 2020. He was born in Stafford, CT, son of the late Louis and Laura (Satori) Tiziani. Gordon was a graduate of Monson Academy. During the summer in his high school... View Obituary & Service Information

The family of Gordon B. Tiziani created this Life Tributes page to make it easy to share your memories.

Send flowers to the Tiziani family.