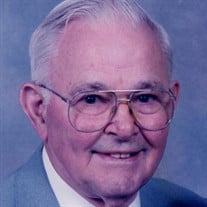 Harold Oehler, 104, passed away at his home in Stafford, CT on Saturday, December 4, 2021; he was born in Holyoke, MA in 1917. Living in South Hadley, MA with parents William and Flora Oehler and at the age of 18, he joined the Civilian Conservation Corps working in Burlington, VT, and Great Barrington, MA. He attended and graduated from The University of Massachusetts Stockbridge and majored in Forestry Management. Harold served in the United States Army from 1941 - 1944 and served in the South Pacific during World War II. He had a distinguished career and as a lieutenant; he was awarded a Soldier's Medal for heroism in November of 1944 for saving the life of a fellow serviceman while on Army duty at Cape Gloucester, New Britain. Later on he attained the rank of Captain. He was a longtime member of The Stafford American Legion Post 26 and was awarded a Certificate of Continuous Membership for 50 years on March 15, 2016 as an outstanding contributor to the programs of the Legion. For many years, he was an avid hunter, fisherman and golfer and was League Champion of the Stafford Moulton Brothers League in 2000. Harold bought Matteson Lumber Company in Stafford Springs, CT in 1965 and worked there with his wife Gladys for twenty-five years. In 1997, Harold and Gladys had celebrated 56 years of marriage; she passed away in November of 1997. He is survived by his three children, Susan Aline Oehler of Maple Grove, MN, Laurelae Lynn Oehler of West Hartford, VT and Harold Michael Oehler and daughter-in-law Stephanie Summers of Willington, CT; three grandchildren, Nathan Oehler of Willington, CT, Michelle Brassington of Watertown, MN and Michael Braun of Minneapolis, MN; three great grandchildren, Lydia Brassington, Keagan Brassington and Reid Brassington all of Watertown, MN; and his brother, William Oehler of South Hadley, MA. He was predeceased by his eldest son, William F. Oehler of Las Vegas, NV in 2009. Those who wish may make memorial donations to Citizens’ Scholarship Foundation of Stafford, P.O. Box 25, Stafford Springs, CT 06076. Harold recently celebrated his 104th birthday on October 16, 2021 with family and friends and will be sorely missed by all. He was a devoted and loving family man and a true friend to everyone he met. Due to Covid concerns, both funeral services at Introvigne Funeral Home in Stafford Springs, CT, and a Celebration of Life gathering, will be held at a future date for family and friends and will be announced. To leave a condolence online for the family, please visit: www.introvignefuneralhome.com

Harold Oehler, 104, passed away at his home in Stafford, CT on Saturday, December 4, 2021; he was born in Holyoke, MA in 1917. Living in South Hadley, MA with parents William and Flora Oehler and at the age of 18, he joined the Civilian Conservation... View Obituary & Service Information

The family of Harold Oehler created this Life Tributes page to make it easy to share your memories.

Send flowers to the Oehler family.