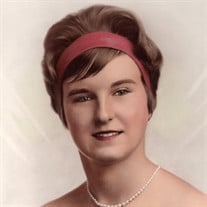 Hope (MacFall) Heavisides, age 77, passed away peacefully on January 28, 2021. She was born on February 24, 1943 in Washington DC to the late Priscilla and Wesley MacFall. She graduated from Darien High School in 1961. Hope graduated with honors from UCONN in 1965, with a Bachelor’s Degree in Science in the School of Nursing. Hope met John E. Julian while skiing at Mount Tom and they married on June 8, 1965. They spent many long hours restoring their 19th century farmhouse and collecting antiques together. In 1966 Justin was born, followed by Jennifer in 1968. Hope loved working on the farm, caring for the animals and taking her horse, Dandy, for rides. She was the type of mother who let her kids get dirty and run barefoot all summer. She did not care when her son put fish and turtlesin the bathtub and she fully supported his collection of spiders, in a variety of sizes, being placed in her gardens, while snakes and other creatures were housed in terrariums. Hope started her career as a Registered Nurse for the Stafford School District in 1967. In addition, she sold real estate and held a broker’s license. Hope had a long and impressive nursing career before her retirement. She worked at Enfield Correctional Facility, CT State Receiving Home, Long Lane School, Rockville General Hospital, and The Institute of Living. After moving to upstate New York, she became employed at Eddie Parker Youth Center for adjudicated adolescents. She enjoyed her years living near the Catskill Mountains in New York and even attended the 1980 Winter Olympics in Lake Placid, NY, with her daughter. She enjoyed cross-country skiing and spending time outdoors. Hope eventually returned to Connecticut and became a Pediatric Home Care Nurse to medically fragile and terminally ill children. Hope’s nursing career centered around the most challenging populations, and she most enjoyed working with children and adolescents who had serious medical and/or psychiatric issues. Hope married Lawrence “Larry” Heavisides in Maui, Hawaii on August 24, 1986. They honeymooned on the island of Oahu after dropping her daughter off at college. Hope shared a close relationship with her stepson, Steven, who was always there when needed. The couple lived in Vernon before moving to Middletown, Rhode Island where Hope loved being close to the ocean. She spent most days walking on the beach with Larry and their dogs, collecting sea glass. Hope’s last home was in Bristol, Rhode Island, where she was known by the entire community as she walked through town with Amos, meeting many people along the way. Hope was fascinated with the history of whaling and could often be seen reading books on the topic. She loved to spend hours tending to her gardens, feeding wild birds, and researching her ancestry. She also loved to travel and especially enjoyed two trips with Larry to Scotland and Alaska. Hope was very proud of her German and Scottish heritage. Hope was predeceased by her sister, Joan Cassell. She is survived by her husband, Larry Heavisides, her daughter, Jennifer Davis, her son-in-law, Bruce Davis, and her beloved grandchildren, Hannah and Hunter. She also leaves behind her son, Justin Wesley Julian, from Idaho, a niece, Dawn Rhodes, from Virginia, and her beloved Pug, Amos. A neighbor, Sue Brackett, became Hope’s dear friend and caregiver during her time in Bristol. Hope had two very special lifelong friends, Sharon Gresk of Manchester and William Van Loan of Darien. These friendships were incredibly valuable to her over several decades. Hope was an intelligent, hardworking and adventurous person who always followed her own path. She often took the road less traveled, but always found her destination. Funeral services will be private. Donations can be made to ISBD at https://www.isbd.org/donate. Introvigne Funeral Home, Inc., Stafford Springs, CT, has care of the arrangements. To leave a condolence online for the family, please visit: www.introvignefuneralhome.com

Hope (MacFall) Heavisides, age 77, passed away peacefully on January 28, 2021. She was born on February 24, 1943 in Washington DC to the late Priscilla and Wesley MacFall. She graduated from Darien High School in 1961. Hope graduated with honors... View Obituary & Service Information

The family of Hope M. Heavisides created this Life Tributes page to make it easy to share your memories.

Send flowers to the Heavisides family.