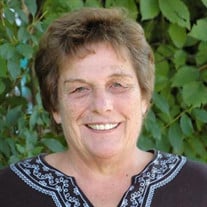 Jane (Hartenstein) Slater passed away April 14, 2020 at St. Francis Hospital after a period of declining health following a stroke suffered late last year. Jane was born in Hartford, CT on June 20, 1945 to Elmer Francis Hartenstein and Roberta (Kaddy) Hartenstein, both deceased. She enjoyed growing up with her siblings Elmer, Richard, and Nancy, and her sister Diana who predeceased her. Jane graduated from Stafford High School in 1963. After a time working as a nurse’s aide, she worked for Traveler’s Insurance Company and studied at the University of Hartford. She subsequently became a long-time employee of the State of Connecticut Department of Corrections, retiring as business manager of the industries department. She particularly enjoyed her years working directly with inmates who assisted her with the financial operations of the industries department on their path to returning to society. She married her beloved husband, Kenneth R. Slater, Sr., now deceased, on March 5, 1966. They raised their two children, Kenneth and Kevin, in Stafford and later enjoyed spending special times with her five grandchildren, Ken and Patricia Slater’s sons, John (Jack), Luke and Eric, and Kevin and Stacey Slater’s daughter, Shannon and son, Connor. She loved teaching the grandchildren to swim and spending special birthday dinners with each of them. Jane was a lifelong devoted member the First United Methodist Church in Stafford Springs. In addition to being a faithful congregant, she was a member of the choir, a member and former chair of the board of trustees, a Sunday school teacher and an active participant in many social and charitable works of the church including delivering meals to persons in need as recently as the weeks prior to suffering the stroke. She was a long-time member of the Order of the Eastern Star serving multiple terms as Worthy Matron of the Wolcott Chapter in Stafford and later the Climax Chapter in Mansfield. She was an active member of the Stafford community including recently serving as a multi-term member and Chairman of the Town of Stafford Board of Finance. She served as a member and former officer of the Stafford Democratic Town Committee, the Stafford 300th Year Anniversary Committee, a former Cub Scout leader and past president of the Staffordville Elementary School Parent Teacher Organization. She so enjoyed spending time with her friends, many dating back to childhood. Perhaps her greatest joy was spending time at the family’s cottage at Staffordville Lake relishing every moment from the rare times of quiet to the cacophony of huge family picnics enjoyed with her siblings and in-laws, Jim, Jean, Lois and Jackie, and nieces and nephews and their spouses and children, Dr. Robert and Jill Carlson and their sons Tucker and Garrett, Tracy Hartenstein, Beth and Scott Gallison and their daughters Rachel and Sarah, Diana and Todd Rose and their daughters Danielle and Abby, Rick and Amy Hartenstein and their daughter Katie, and Jim and Cara Ravetto and their sons Ryan and Cameron, along with extended family too numerous to name. Donations in her name may be made to the Flo’s Friendship Kitchen, c/o Jill Gregori, 109 Cooper Lane, Stafford Springs, CT 06076. A private funeral will be held at the First United Methodist Church on Saturday, August 15, 2020 at 10:30 A.M., which can be viewed in its entirety on Facebook live on the First United Methodist Church Stafford Springs Facebook page, and on its video list if you cannot enjoy the celebration of her life during the live broadcast. She will be buried at Stafford Springs Cemetery, Stafford Springs, CT. Introvigne Funeral Home, Inc., Stafford Springs, has care of the arrangements. To leave a condolence online for the family, please visit: www.introvignefuneralhome.com

The family of Jane H. Slater created this Life Tributes page to make it easy to share your memories.

Send flowers to the Slater family.