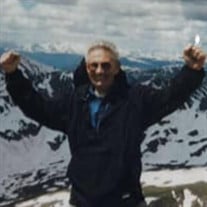 Richard “Dick” John Roethlein, passed away peacefully on March 13, 2019 in Stafford Springs, CT. He was 85 years old. Richard was born in Queens, NY on January 3, 1934, raised in Glendale, NY, and went to Holy Trinity High School. He served as a medic in the U.S. Army in Korea and Pakistan, following the end of the Korean Conflict, then received a BS and MS in Chemistry from St. John's University, Queens, NY. Richard met Marie Finnerty of Brooklyn, NY at a dance party, fell in love and married in 1962. They were devoted dance partners and spouses for the 53 years they were married, raising five children, numerous cats and many seasons of vegetables and flowers together. Moving his family from New York shortly after marriage, Richard worked as a chemical engineer at various manufacturing companies in New England, settling in Stafford Springs, CT and eventually retiring from United Technologies Corporation, International Fuel Cell Division. At UTC, Dick held several patents and helped develop fuel cells for U.S. spacecraft. Richard was a devoted husband and father who enjoyed spending time with his family, museums, movies, theatre, touring, hiking, camping, fishing, and beach trips left very little time for relaxation. Richard was a doer! He taught his children to have faith in God, know right from wrong, work hard, have good manners, get an education, and to appreciate the wonders of nature and a good home cooked meal. Richard strongly supported all of his children going to college, helping them in any way he could. His hobbies included reading, hiking, dancing, travelling, feeding birds and cats, and gardening. He was always up for a rousing conversation about history, politics, or people. Richard explored numerous federal and state Parks, and joined group excursions in Scotland, Ireland and Austria. In later years he enjoyed going to his grandchildren's sporting events. Richard was involved with his community and kindly offered to help others whenever possible: delivering Meals on Wheels to the home bound, moving a neighbor’s furniture, putting in a garden for someone or painting a house for a sick relative. Richard was an active member of St. Edward’s Catholic Church in Stafford Springs, CT, and was on the Stafford Library Board and Zoning Board of Appeals. Richard was predeceased by his wife, Marie, and is survived by his five children and their spouses, Christopher (Laura), Richard (Nicole), Jennifer (Scott), Terence, and Mia (Nadine). He also leaves behind his grandchildren, Matthew, Nathan, Zachary, Aubrey, Emilee (Chaz), Kelsey, Nellie, Sean, Kay, Morgan, Anneliese, Greta, Ava, Cullen, Riley, and great granddaughter, Clover. He loved them all deeply as they did him. The family wishes to thank Evergreen Health Care Center for their care and support during Richard’s final days. Funeral services with burial in St. Edward Cemetery, Stafford Springs, CT, will be held privately. Family and friends are invited to celebrate Richard’s life on Saturday, March 30, 2019 at 1 P.M. at Wilderness Lake Campground, 150 Village Hill Rd., Willington, CT. Donations are kindly accepted in Richard’s name at the Connecticut Humane Society, 701 Russell Rd., Newington, CT 06111. Introvigne Funeral Home, Inc., Stafford Springs, CT, has care of the arrangements. To leave a condolence online for the family, please visit: www.introvignefuneralhome.com

The family of Richard J. Roethlein created this Life Tributes page to make it easy to share your memories.

Send flowers to the Roethlein family.