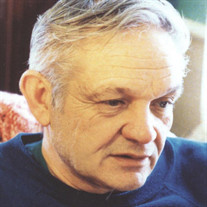 Roy Rovozzo passed away on the morning of April 2, 2018 in Willimantic, CT. Roy S. Rovozzo was born January 29, 1932 at Johnson Memorial Hospital in Stafford Springs, CT. His parents, Sam (Massamino) Rovozzo and Edna (Hayford) Rovozzo, had moved to Connecticut from Vermont in 1925, after hearing of work opportunities at the Hall Textile Mill in Willington, CT. One of five children, Roy grew up primarily in “The Village”, the Hall Company housing area near the mill. His older brothers, Reginald and Arthur Leon, looked out for him at first, although the tight local community proved more often a supportive rather than competitive environment. Roy’s favorite activities as a youth included swimming (or alternatively, skating) on the nearby Hall’s Pond and playing basketball at grammar school, where he joined the team, later competing on the area high school level. Roy was also interested in baseball and was able to bat effectively either right or left-handed. His pastimes had to be wedged into a busy schedule because his father, Sam, kept the children engaged with tasks and around-home responsibilities. This orientation produced in Roy a strong work ethic. Around the time of his brother Arthur’s premature death, the Rovozzo Family moved to a small farm in Willington, CT. In spite of difficult new chores and having to do much of the work by hand, with no tractors, the farm helped to further inspire Roy’s love of the land and gardening, as well as animal life. Never a hunter or fisherman, like Sam and Arthur, Roy wanted to see animals undisturbed in their natural surroundings. Always a fan of the New England based sports teams, Roy had more than a few disagreements with locals whose families had moved here from New York State. Later a follower of pro football, he liked watching games featuring the Detroit Lions, Green Bay Packers, Dallas Cowboys, and Pittsburg Steelers, until the emergence of the revitalized New England Patriots in recent years. After attending Windham High School through the mid to late 1940s, Roy went to work at the Storrs UConn Campus, at first in a crew of men who had to do furniture moving and unskilled labor. He next worked with carpenters, painters, and mechanics. The anticipation of his imminent Korean War draft notice prompted him to join the United States Navy. Roy served for two hitches, four years aboard the U.S.S. Columbus, and was trained to operate the ship’s large guns. Deployed around the world, the Columbus visited 25 nations and ports from Boston, MA to Hawaii during Roy’s enlistment. His Navy years were marred only by a phase of illness after an emergency surgery and an infection which almost proved fatal. Returning to state employment in 1954, Roy began to work at UConn’s “Key Control” with a friend from earlier years, Leonard Todd. At first part of the maintenance division and later merging with the security division, key control personnel kept track of all keys made, loaned, and circulated on campus, as well as providing upkeep and repairs for every lock throughout UConn’s facilities, dorms, and installations. Roy eventually became the supervisor of Key Control. By 1957, Roy met Science graduate student Grace Ann Catanio of Rhode Island who was working on her degree at UConn. They were married and, with plenty of help from their friends, UConn acquaintances, and Roy’s father, they built their own house in 1959-1960, in Willington, CT. Their son Arthur Warren was born in 1960. Roy retired from state employment in 1987 after 37 years. Apart from keeping busy with gardening and outdoor projects, he took care of his elderly mother until 1996. Roy kept involvement with carpentry, woodworking, and also wood carving, as part of his life. He was fascinated by antiques, and as a hobby, was interested in rock tumbling and polishing after meeting ‘rockhounds’ on Cape Cod, MA. In later years he built numerous bird houses, some elaborate and in bright colors. He was beginning to repair his Father’s barn at the point when heart and health problems curtailed his activities. A great lover of automobile design, he particularly liked cars and trucks of 1930s to 1950s vintage. His own favorite car was a blue and white 1956 Chevrolet. Roy is survived by his sister, Beverly Morgan McCall of Chaplin, CT, and his son, Arthur W. Rovozzo of Willington, CT. Donations in Roy’s name may be made to Old Sturbridge Village, 1 Old Sturbridge Rd., Sturbridge, MA 01566, Foodshare, 450 Woodland Ave., Bloomfield, CT 06002, or to Joshua’s Trust, 624 Wormwood Hill Rd., Mansfield Center, CT 06250. Calling hours will be held on Monday, April 9, 2018 from 3-5 P.M. at Introvigne Funeral Home, Inc., 51 East Main St., Stafford Springs, CT. A graveside service will take place on Tuesday, April 10, 2018 at 2 P.M. at Willington Hill Cemetery, Turnpike Rd. (Rte. 74), Willington, CT. In addition to these services, a special remembrance event is being planned for Sunday, May 6, 2018 at 3 P.M. at the Packing House, The Mill Works (old Hall Thread Mill Building II), 156 River Rd. (Rte.32), Willington, CT. All are welcome! For online condolences or directions, please visit: www.introvignefuneralhome.com

The family of Roy S. Rovozzo created this Life Tributes page to make it easy to share your memories.

Roy Rovozzo passed away on the morning of April 2, 2018 in Willimantic,...

Send flowers to the Rovozzo family.