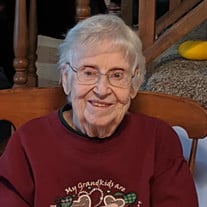 Shirley Mae (Colvin) Butler, of McMinnville, OR died on November 21, 2020. Mrs. Butler was born May 9, 1931 in Providence, RI. She was the daughter of the late Ralph R. and Ethel M. (Holden) Colvin. Mrs. Butler was educated in the Warwick, RI school system. Following graduation, she was employed in the office of the former Apponaug Company Print Works until her relocation to Connecticut in 1953. She was a secretary in the former Electro Motive and American Thread Company offices in Willimantic, CT. In 1969, Mrs. Butler was hired as University helper in Life Sciences at UConn Storrs. After 24 years of service, Shirley retired from the School of Education as Administrative Assistant in 1993. She also worked as a part-time receptionist in the Mashantucket Pequot Bingo/Foxwoods Casino office for 11 years. Survivors include a son and daughter-in-law, Bradley Earl Butler and Shannon (Murphy) Butler of McMinnville, OR; a daughter and son-in-law, Lori Anne (Butler) Links and Douglas Links of Stafford, CT; a beloved sister and best friend, Beatrice (Colvin) Steere of Naples, FL; five granddaughters, Kari (Links) Wall of Uncasville, CT, Amanda (Links) Dubnansky of New Market, MD, Victoria (Links) Meo of Grand Rapids, MI, Katharine Butler and Hannah Neagle of McMinnville, OR; a beloved great-grandson, Nathan Dean Wall; a god-child, Gail (Butler) Greci of Stafford, CT; and several nieces and nephews. Mrs. Butler was predeceased by a beloved son, Scott Bran Butler in 1977; a sister, Mabel (Colvin) Gebler in 2003; and two brothers, Russell G. Colvin and R. Raymond Colvin in 2017. No calling hours will be held. A graveside burial service will be held at the convenience of the family. In lieu of flowers, donations may be made to the Preston City Congregational Church, where Shirley was a member, at 321 Route 164, Preston, CT 06365, the National Kidney Foundation, 30 East 33rd St., New York, NY 10016, or the National Eye Institute at https://nei.nih.gov/ . Introvigne Funeral Home, Inc., Stafford Springs, CT has care of the arrangements. For online condolences, please visit: www.introvignefuneralhome.com

Shirley Mae (Colvin) Butler, of McMinnville, OR died on November 21, 2020. Mrs. Butler was born May 9, 1931 in Providence, RI. She was the daughter of the late Ralph R. and Ethel M. (Holden) Colvin. Mrs. Butler was educated in the Warwick, RI... View Obituary & Service Information

The family of Shirley Mae Butler created this Life Tributes page to make it easy to share your memories.

Shirley Mae (Colvin) Butler, of McMinnville, OR died on November...

Send flowers to the Butler family.