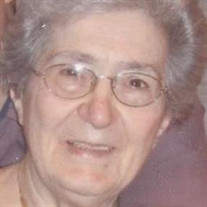 “Mamma” Teresa Andreoli, born Maria Teresa Borbiconi, the daughter of Sante and Sofia (Fontana) Borbiconi, passed away quietly in her sleep Sunday, January 27th, 2019. She was born on December 1st, 1926, in the small town of Pergola in the Marche region of Italy. Forced to quit school after the fourth grade, Teresa went to work at a nearby convent learning to sew and crochet. She also helped her parents in their salumeria and butcher shop. She spoke of the hardships World War II brought. With no wheat crops, ground up acorns were used for bread flour. Walking through town one day, she narrowly escaped death by diving into the bottom of a bell tower as Allied artillery shells exploded in the street around her. In October 1948, Marino Andreoli saw her on the balcony of her family apartment, and told his companion that she was the girl he would marry. A brief courtship ensued and they were married on October 31 – All Hallow’s Eve! After a viaggio di nozze (honeymoon) in Venice, the newlyweds sailed to America on the S.S. Saturnia, and the “90-day bride” arrived with her husband in New York in December 1948. They moved into an apartment above the Arizona Restaurant on Main Street, Stafford Springs where she called home for the next 58 years. After a brief stint at the Rhode Island Worsted Mill in Stafford, Teresa started washing dishes and cooking at the Arizona with her in-laws John and Agnes Andreoli and their partners Reno and Irma Francini. A son Robert was born in 1951, followed by a daughter Marie 15 months later. Studying and learning to speak, read, and write English, Teresa took her naturalization exam and became an American citizen in 1953. She was always proud of this accomplishment. Continuing to work at the restaurant, the couple bought a 50% share in 1962 and took complete ownership in 1967. Over the next 39 years fads came and went, but one thing remained constant in Stafford Springs, Mamma Teresa was always there in charge of the “Zona.” Her pasta sauce is impossible to duplicate, as is the case of most of her recipes, and she alone kept them consistent over the years. Always happy to cash a paycheck, loan someone a little money, extend credit for a meal, or just give advice and consolation in times of trouble, she made the Arizona more than a bar and grill. She loved her work and the satisfaction of knowing that after a busy night, “her people” would be going home happy and full. After a fire in the Arizona building caused extensive damage to the restaurant in 2006, Teresa chose to close the business, hang up her apron, and retire at the age of 79. Although she found much solace and pleasure in knitting blankets and slippers for her friends and loved ones, she never quite enjoyed retirement. She longed for the hustle and bustle of her bar and grill, and missed the excitement of a full house. Even into her final days with us, she spoke of how much she missed the people and wished she could still work at the restaurant. We would like to thank everyone who ever worked with her over the years for helping to make the Arizona the special place it was for so many people. We would like to thank the aides at Home Instead Senior Care, and a special thank you to the wonderful staff at Evergreen Health Care Center. She was predeceased by her husband Marino, her brother Giovanni Borbiconi, and her sister Josephine “Pina” Borbiconi. She leaves her son Robert and his wife Diane, and her daughter Marie Spak and her husband Eugene. She also leaves her pride and joy, her three grandchildren: Emma, Marco, and Sara. She also leaves many nieces, nephews, grand-nieces, and grand-nephews in Italy, Denmark, and Worcester, Mass. In honoring her explicit wishes, there will be no calling hours, and funeral services will be private. Donations in lieu of flowers can be made to the Stafford Garden Club, P.O. Box 1124, Staffordville, CT, 06077. Introvigne Funeral Home, Inc., Stafford Springs, CT, has care of the arrangements. To leave a condolence online for the family, please visit: www.introvignefuneralhome.com

&#8220;Mamma&#8221; Teresa Andreoli, born Maria Teresa Borbiconi, the daughter of Sante and Sofia (Fontana) Borbiconi, passed away quietly in her sleep Sunday, January 27th, 2019. She was born on December 1st, 1926, in the small town of Pergola... View Obituary & Service Information

The family of Teresa Andreoli created this Life Tributes page to make it easy to share your memories.

Send flowers to the Andreoli family.