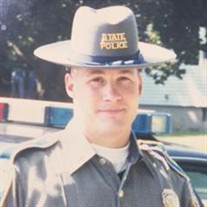 Remembering the life, death, and legacy of Trooper First Class Kevin M. Miller. On Thursday afternoon, March 29, 2018, Kevin unexpectedly entered into eternal life. Kevin was born on February 7, 1969 in Hartford, Connecticut to Linda L. Miller and to the late Raymond F. Miller. Kevin attended East Hartford High School and graduated in 1987. Following graduation, Kevin joined the United States Marine Corps where he proudly served during the Gulf War. Kevin served our country as a proud Marine and finished his final year of his four year tour on the U.S. Iwo Jima. Once separated from the service, Kevin attended the University of Connecticut under the Montgomery GI Bill. Kevin graduated with a degree in Liberal Arts in 1997 adding yet another notch to his glowing list of accomplishments. After college in 1998, Kevin continued his work in service by becoming a Connecticut State Trooper. Over the years, Kevin was stationed with Troop E in Montville, Troop K in Colchester, and currently he was serving the State of Connecticut at Troop C in Tolland. Kevin served our state for the past 19 plus years and was eligible to retire in only a few short months. Of all the accomplishments made by Kevin, nothing made him prouder than becoming a father to Ryan and Sarah Miller. His children meant everything to him and his love for them will go on through eternity. Son Ryan (13) shared a very special bond with his dad along with their love for fishing and sports. They enjoyed countless fishing trips as father and son to New York where these memories and many more will last a lifetime. Daughter Sarah (10) shared her dad’s love of sports. Sarah plays softball and Kevin never missed the chance to watch his little girl on the field. Off the field, Kevin enjoyed a good game of catch with his favorite little player. Kevin also leaves behind, former wife, Jennifer Miller and mother of their children, Sarah and Ryan Miller. He is survived by his mother Linda, who will be forever proud of the son, brother, father, and man he became. Linda is quoted as saying: “Kevin earned his dress blues in the Marines and in life”. A sentiment echoed by all who knew and loved him. He leaves behind his only sister, Kimberly Miller Mounts. Kimberly is quoted as saying: “I lost my baby brother and my best friend that day. He will be forever missed”. Along side Kimberly is her husband Bob Mounts. Bob and Kevin were not only brothers-in-law, but truly best buds. Uncle Kevin also leaves behind his favorite 14 year old triplet niece and nephews, Madison, Ethan and Ian Mounts. Kevin was so proud of his little triplets and shared so many special moments with all three of them. He shared a love of wrestling with Ian and enjoyed cheering Ian on during his wrestling matches. Uncle Kevin also loved watching both Ethan and Madison on the soccer field playing the game that they love. Kevin was truly excited to watch not only his own children, but also his niece and nephews as they grew into the young people he cherished so much. He will forever be with them on their journey. Visitation hours for Kevin will be held on Thursday, April 5, 2018 from 2-4 P.M. and 5-8 P.M. at Pratt & Whitney Stadium at Rentschler Field, 615 Silver Lane, East Hartford, CT. A Mass of Christian Burial will be held on Friday, April 6, 2018 at 11 A.M. at Pratt & Whitney Stadium at Rentschler Field, East Hartford, CT, followed by full Military Honors. Burial will be held privately. In lieu of flowers, please make memorial contributions to: http://gofundme.com/tfc-kevin-miller-1015. All funds will go directly to Kevin’s immediate family. Introvigne Funeral Home, Inc., Stafford Springs, CT, has care of the arrangements. For online condolences or directions, please visit: www.introvignefuneralhome.com

The family of TFC Kevin M. Miller created this Life Tributes page to make it easy to share your memories.

Remembering the life, death, and legacy of Trooper First Class...

Send flowers to the Miller family.