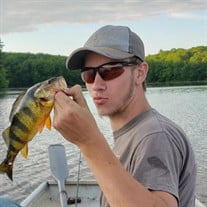 Dustin William Hurd, 17, of Union, CT, died on Monday, September 28, 2020, due to a horrific accident. Dustin was born at Rockville Hospital, the son of Anthony and Jean Hurd, and the brother to Taylor Hurd, all of Union, CT. Dustin was a senior in the HVAC program at Windham Technical High School in Willimantic, CT. Dustin’s greatest joy in life was working on the family farm, where he learned how to run equipment from his grandfather when he was just 4 years old. He loved throwing hay, fixing equipment, dirt biking, and hunting at both the farm and his house, and of course his daily runs to Burger King when he was working at the farm. Dustin was a member of Boy Scouts and truly embodied what that organization stood for. He has a vast group of friends who all shared the same passions with him, quading, dirt biking, hard work, and hunting/fishing. There was never a time where Dustin didn’t have a plan to buy something to fix and turn it over to make money for his next project. In simple terms, he was everyone's go to for help, the person people wanted to hang out with because of his kind nature, and a true farm kid that would rather work a 12 hour day on the farm than do 1 hour of school work. He gave the gift of life to countless other people by donating his organs which showed his true unselfish character to always want to help others. Dustin is survived by his parents, Anthony and Jean Hurd, his sister, Taylor, half sister, Ashley LaRoe, his grandparents, Anthony Sr. and Mary Hurd, his aunt and uncle, Brenda and Erick Wildes, uncle, Bill Mihaliak, and aunt and uncle, Tina and Jeff Williams. In addition he had six cousins who he leaves behind, his little buddy William, Emily, Christopher, Jenna, and his two nieces Lilly and Abby. He was predeceased by his grandpa, William Mihaliak and grandma, Anita Mihaliak, who he idolized and would do anything for. His dream was to be an HVAC technician, build a house on the land he inherited from his grandparents and run the family farm with his cousin William. Calling hours will be held on Friday, October 2, 2020 from 11 A.M. to 1 P.M., with a prayer service to be held at 1 P.M., at Introvigne Funeral Home, Inc., 51 East Main St., Stafford Springs, CT. Burial will follow in St. Edward Cemetery, Stafford Springs, CT. To make a contribution to the family, please do so at: https://www.gofundme.com/f/dustin-hurd039s-funeral-expenses To leave a condolence online for the family, or for directions, please visit: www.introvignefuneralhome.com

Dustin William Hurd, 17, of Union, CT, died on Monday, September 28, 2020, due to a horrific accident. Dustin was born at Rockville Hospital, the son of Anthony and Jean Hurd, and the brother to Taylor Hurd, all of Union, CT. Dustin was a... View Obituary & Service Information

The family of Dustin W. Hurd created this Life Tributes page to make it easy to share your memories.

Send flowers to the Hurd family.