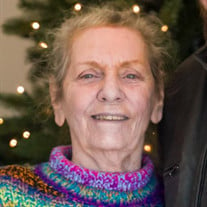 Jaqueline “Pixie” (Foster) Morosani, age 79, of Tolland, CT entered eternal life on January 29, 2022. Pixie was born April 30, 1942 in Manhattan, NY to the late Agnes (Sloan) and Bertram Foster. She leaves her husband David Richards. Pixie owned and ran a hot dog stand in Madison and multiple filling stations in the 1970’s with her late former husband Remy Morosani. She then went on to work in the food and beverage industry for several years where she acquired the name Pixie. She then went to work at Lipman Chevrolet and her dedication and hard work earned her “Salesperson of the Year”. This inspired a purchase of a Corvette and before long she was a member of a “Corvette Club”. After her time at Lipman she went on to flourish her own business in marketing and networking. Pixie was truly a people person and always saw the positive in every situation. Pixie was an animal lover from breeding Afghan dogs to adopting rescue animals. She was a member of the Stafford Rotary Club. Besides her husband, she is survived by her son, Reto Morosani; her grandchildren, Tatiana Morosani, Michael Flanagan, Derick Flanagan, Justin Hoffman and Jessica Calamari; five great grandchildren; her brother, Michael Foster; sister, Suzanne Bridge; and several nieces, nephews, great nieces and great nephews. She was predeceased by her parents, Agnes (Sloan) and Bertram Foster; her former husband, Remy R. Morosani XIV; her son Remy R. Morosani XV; her daughters, Elviera Flanagan and Tanya Morosani; her granddaughter, Elizabeth Hoffman; and her sister, Arlene Piatti. A memorial service will be held at a later date. Introvigne Funeral Home, Inc., Stafford Springs, CT has care of the arrangements. To leave a message of sympathy for the family, please visit: www.introvignefuneralhome.com

The family of Jacqueline "Pixie" Morosani created this Life Tributes page to make it easy to share your memories.

Send flowers to the Morosani family.