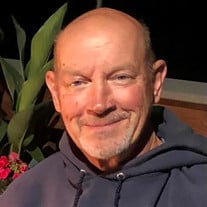 John J. “Jack” Rup, Jr., 69, of Willington, CT, passed away unexpectedly on Saturday, July 17, 2021. He was born in Northampton, MA, son of the late John J., Sr. and Jennie (Sparko) Rup. Jack served our country in the United States Navy during the Vietnam War era, and retired from Pratt & Whitney as a design engineer. A man of many passions, Jack was an avid skier, golfer, farmer, 5k runner and fisherman. He dabbled in wine-making and beer brewing at “The Fisher Hill Brewery” and was a fine collector of “hidden treasures” at tag sales, curbside bargains and beyond. An explorer at heart, Jack would pack up scuba gear in his younger days and travel New England diving off the shores with his wife. Later in life, he moved on from sea exploration to take to the skies; he became a sport pilot and would fly a Cessna around the East Coast with his golfing gear exploring various courses and ice cream shops with his wife as co-pilot. A man of faith, Jack was a faithful parishioner of St. Philip the Apostle Church, where he served as a Eucharistic minister, lector, and CCD teacher in addition to his membership with the Knights of Columbus Council #6934. He was also a member of the American Legion Post in Easthampton, MA, Zoning Board of Appeals in Willington, the Willington Fish and Game, and a 2020 Census Bureau Field Representative. He also was the personal fitness mentor for the Boy Scouts in Willington. If there was a task where others would take a step back, Jack would take a step forward. Jack is survived by his beloved wife of 30 years, Kathy (Belske) Rup; two children that he loved dearly, John W. Rup and his wife Brittany, and Sarah Rup, and five sisters, Mary-Lou Rup, Sandie Rup and Louis Blanchet, Bonnie Rup and Rod Hewick, Laura Rup-Blajda and her husband Ron (and their children Allison Blajda and her husband Will Marsh, Andy Blajda and his fiancé Courtney Afonso along with their son, Orion), and Cyndi Rup and Sean Soltysik. Calling hours will be held on Thursday, July 22, 2021, from 5-7 P.M. at Introvigne Funeral Home, Inc., 51 East Main St., Stafford Springs, CT. A Mass of Christian Burial will take place on Friday, July 23, 2021, at 10 A.M. at St. Philip the Apostle Church, 64 Pompey Hollow Rd., Ashford, CT. Burial with Military Honors will follow in St. Philip Cemetery, Ashford, CT. In lieu of flowers, memorial donations can be made to Covenant House, Times Square Station, P.O. Box 731, New York, NY 10108. To leave a condolence online for the family, or for directions, please visit: www.introvignefuneralhome.com

The family of John J. "Jack" Rup Jr. created this Life Tributes page to make it easy to share your memories.

Send flowers to the Rup family.