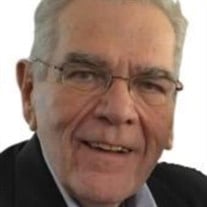 William Gregonis, beloved husband of Jane, and devoted father of Sarah, passed away peacefully at home on January 30, 2022, while holding their hands. He was a courageous and valiant warrior who had fought through illness for many years.....a very special "miracle man". Bill was a kind, generous, and loving husband, father, and grandfather. He will be dearly missed by his family and friends. Bill was born in Minersville, PA, on July 19, 1937 to Charles and Mary (Prebula) Gregonis. The family moved to Connecticut in 1943. Bill was educated in the South Windsor school system, and received a BS from ECSU, an MS from CCSU, and a sixth year certificate from UConn. He was a talented, respected, and dedicated educator, who worked in Vernon and East Windsor for 35 years as a teacher and an administrator. Throughout his career in education, Bill enjoyed teaching many levels of students, as well as spending several years in administration. In all phases of his profession, he was a strong and vocal advocate for his students, and was loved and admired by so many of them, as well as by his colleagues. Social studies and history, the subjects that Bill taught, led him to enjoy traveling in the United States and Europe whenever possible. He and Jane spent many summers traveling throughout our country with their daughter, and experiencing adventures that were always some of the happiest of memories for Bill and his family. He also loved spending time in Westerly, RI, at their summer cottage that became the family's "happy place". All of these memories will be treasured. The Tolland County 4H Program was a source of fulfillment for Bill. He was a volunteer for many years, and participated in fairs and activities with his daughter. Sarah. He was also on the board of the Teen Connection Conference at UConn for several years. Bill was very fortunate to have been able to joyfully welcome his four grandchildren into the world in 2011 and 2013, twin boys and twin girls. He adored them, and spent quality time reading to them, playing with them, and imparting his own special kind of love and wisdom to them unconditionally. The children adored him in return. Bill leaves his loving wife, soul mate, and best friend, Jane (Gnutti) Gregonis, his cherished daughter, Sarah Wall and her husband Ryan, and his four very special grandchildren, Jack, Liam, Lillian, and Mallory Wall, all of Whitman, MA. He also leaves his brothers, John Gregonis and his wife Elaine, Charles Gregonis and his wife Christine, his sister Mary Jane Butler, brother-in-law Walter Abbe, and sister-in-law, Suzanne Willard, as well as many nieces, nephews, and friends. Bill was predeceased by his sisters Dorothy Carney and Elizabeth Abbe, and his brothers-in-law Francis Carney and Gary Butler. Services will be held privately. In lieu of flowers, donations may be sent to The Hole in the Wall Gang Camp, Sandy Hook Promise, or a charity of the donor's choice. Introvigne Funeral Home, Inc., Stafford Springs, CT, has care of the arrangements. To leave a condolence online for the family, please visit: www.introvignefuneralhome.com

William Gregonis, beloved husband of Jane, and devoted father of Sarah, passed away peacefully at home on January 30, 2022, while holding their hands. He was a courageous and valiant warrior who had fought through illness for many years.....a... View Obituary & Service Information

The family of William C. Gregonis created this Life Tributes page to make it easy to share your memories.

Send flowers to the Gregonis family.